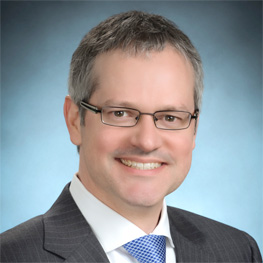 Dr. Robert Amyot was appointed President, CAE Healthcare in April 2014. Dr. Amyot was previously CAE Healthcare’s Vice President for Medical Programs and Chief Medical Officer, a position he held since January 2012. For two years prior to that, he served as Director of Ultrasound Education for CAE.

In 2006, Dr. Amyot initiated the VIMEDIX project and is the inventor of the first simulator for transthoracic echocardiography to incorporate virtual reality technology. He cofounded VIMEDIX Virtual Medical Imaging Training Systems, which was acquired by CAE Healthcare in January of 2010. The CAE VIMEDIX ultrasound simulator is now used in leading medical centres around the world, including the Mayo Clinic, Beth Israel Deaconess Medical Center and Massachusetts General Hospital.