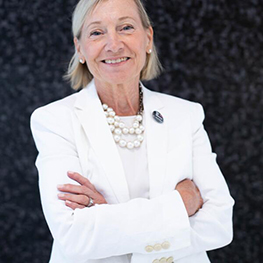 A graduate of the Faculty of Medicine at the University of Toronto, where she also completed a Masters in Education at OISE, Dr. Houston has distinguished herself as a collaborative leader in health professional education. She has served in a number of leadership roles both at the University and at St. Michael’s Hospital, where she served as Vice President, Education. She was Vice Chair of Education in the Faculty of Medicine Department of Anesthesia from 2004 to 2011 and served as Acting Vice-Dean, Undergraduate Medical Education in 2012-2013. At St. Michael’s she has served as Medical Director, Perioperative Service Program and Anesthetist-in-Chief, among other roles. In addition, she co-chaired the TAHSN Education Committee from 2011 to 2014.

Dr. Houston joined the Department of Anesthesia at the Faculty of Medicine in 1984 as a Lecturer and was appointed full Professor in 2006. Throughout her career she has been recognized with numerous teaching and leadership awards. She is an active member of a number of international and national organizations and associations, including the Canadian Anesthesiologists’ Society, of which she was President from 2012 to 2014.


Back to Board of Directors